Origins of Signs, and Symbols used in Modern Society

SYMBOLS YOU SEE EVERYDAY, YET DONT KNOW THE MEANING:beware yet be advised!! 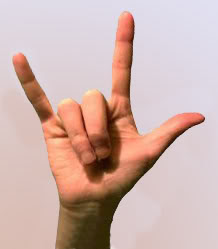 **MEANS I LOVE YOU SATAN**
This American Sign Language allophone is derived from a combination of three handshapes: I, L, and Y

**Given various meanings, such as "all right", "cool" or "smooth".If the thumb is held to the ear it is a request to be called on the telephone, if held to the mouth it implies drunkenness. **

*Satanic*A gesture in Mediterranean
countries, often meaning infidelity, the "devil sign", mano cornuta or horned hand, Inspired by Anton LaVey and used by Satanist, in the heavy metal music industry has turned into a sigh we use for "rock on" American universities have adopted it as a sign of support for their athletic teams and when displayed with the palm facing inward it can denote the Phi Beta Sigma Fraternity, Inc.
The corna (Italian for horns, also mano cornuta, horned hand) is a gesture with a vulgar meaning in Mediterranean countries.variety of meanings in heavy metal, where it is also known as devil horns, goat horns, rock horns, throwing the goat, evil fingers, Pommesgabel, mano cornuto, peka evil or just the horns.There is a theory that states
that Corna is the antagonist of the Sign of the Cross- where three fingers brought to a point symbolize the Holy Trinity. Opposite of the Holy Trinity is the Unholy Trinity: Satan, Antichrist and the False Prophet, represented by the three fingers of the Corna.

Thumb out is the, I love you Satan.

****The Sign Of The Horns
Its origins can be traced to Ancient Greece, and in Ancient Rome it symbolized a CURSE. The sign of the horns, also corna (Italian for horns, mano cornuta, horned hand fare le corna, to make the horns, or simply the devil horns) **

Inverted Pentagram Used in witchcraft and occult rituals to conjure up evil spirits. Satanist use it 2 points up and pagans use it one point up. Any way it is used symbolizes evil.

A demonic deity and symbolic of Satan.
It is also now being used by the masons. It can be seen on their buildings and the emblems the put on their vehicles to identify each other.

*Udjat or all seeing eye. one symbol referring to Lucifer, whom it is though will pass judgment. Below the eye is a tear because he mourns for those outside his influence.*

**All seeing Eye Believed to be the eye of Lucifer and those who claim control of it have control of world finances.This one is the basis of the New World Order. See Government Propaganda for more info**

*Goat Head The horned goat, goat of mendes, Baphomet, god of the witches, the scapegoat. It's a Satanist way of mocking Jesus as the "Lamb" who died for our sins.*

**Horned Hand The sign of recognition between those in the Occult. When pointed at someone it is meant to place a curse. Note the thumb over the fingers and given by the left hand. **

Logo of Time Warner/ AOL! Notice how it resembles the Udjat and is akin to the all seeing eye! Time Warner has a major monopoly on communications in the world. They control what you see and hear.

Cross of Nero - Or Peace sign. Another sign that mocks the cross of Jesus. Also know as "The Dead Man Rune". It appears on the tombstones of some of Hitler's SS troops

Anarchy Means to abolish all laws. In other words "do what thou wilt" the law of Satanists. Used by Punk rockers & Heavy Metal followers.

Anti Justice The roman symbol for justice was an axe upright. Being upside-down it represents anti justice or rebellion. Feminists use a double axe upright as a symbol of ancient matriarchy

Black Mass Indicator Indicates a black mass has or will take place. It mocks the catholic mass which is full of pagan beliefs. Holy Items are defiled and the lords prayer is recited backwards.

Anton Szandor LaVey
In the 1950s Anton LaVey formed a group called the Order of the Trapezoid, which turned into the governing body of the Church of Satan.

On the cover of the Aquarian New Age is a Mobius, it is really used by them as triple six (666). The emblem on the cover of the New King James Bible [same symbol as P.O.D.'s] is said to be an ancient symbol of the Trinity. The old symbol had gnostic origins. It was more gnostic than Christian.

The Sign Of The Horns Its origins can be traced to Ancient Greece, and in Ancient Rome it symbolized a CURSE

This gesture is the satanic salute, to Satan.

Church of Satan Founded by Anton LaVey in 1966

666 The number of man. The mark of the Beast. Revelation 13:18 (look closely at the symbols and see if it looks familiar?)
My reason for posting these pictures of Symbols and Meaning along with Origin, is so that people are aware of the Good SIGNS and bad ones. Im not trying to convert anyone,my mission is to enlighten.We're Capable of putting Two & Two together! Ive always been in touch with my spiritual side every since i could remember.Being a child born and raised in the Urban Streets of Chicago, Illinois.
"Where our current US President Barrack Obama is from", I seen first hand how the Ghetto corrupts.
And I know hes right, when he says "change Has come"!
If we support him or not, Change means exactly that!!!
The Blood of those slain, in the name of Justice,Peace, Equality,ignorance Conditioned by the Ghetto.haven't been shed in Vain!.If we Stand Up and Unite NOW before there's Another Great Holocaust!.So seeing their are some things we arent taught in school, yet tend to "throw them up" imitating Members of high societies, with the Celebrities, and now our youth. Lets Learn together what they really mean and then decide if we still want to imitate them.TO The New Age!! May none of us be left in the Dark.,..
Pictures Provided by Exposing Satanism.Org
Posted by Unknown at 11:11 AM